When my books sold, I thought I would dye!

It all started with Kiersten White. She's the one who went and made a pact with the universe that she'd dye a wacky stripe in her hair if our agent, the amazing Michelle Wolfson, sold her book. (Paranormalcy. If you haven't heard of it, you must have been living under a rock.)

Michelle did; Kiersten held up her end of the bargain.

Then another of Michelle's clients, the fantastically funny Tawna Fenske, got into the act when her hilarious trio of romantic comedies sold. (Look for the first, Making Waves, this coming August. I've read it -- trust me, you do not want to miss it.)

In the meantime, I'm making good on my vow. Being such a badass risk-taker (ha!), I decided I could easily do it myself. All I would need: 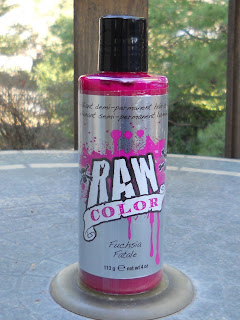 Okay, what really happened: the lady who cuts my hair said it was light enough that the part to be colored wouldn't have to be bleached first, and it would be super easy to do myself. So I got myself this bottle of "Raw Color" hair dye from Hot Topic.

The young man who waited on me there (kind of half-Goth, with a moderate number of piercings -- has anyone else noticed how nice and polite Goth kids are?) thought that since my agency sistahs had gone with purple, I should go with fuchsia, just to mix it up a little.

Plus, "Fuchsia Fatale"? Who could resist? I mean, it's just so ME! 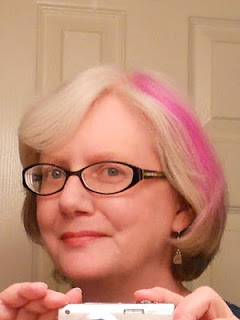 I kind of like it. I'm thinking of going with neon green next time Michelle sells one of my books.

So, have you ever done something kind of wacky and out of character? Did you have a good reason, or was it a what-the-hell moment?