FIRST OF ALL: Have you entered my Caption Contest yet? No? Well, what are you waiting for? GO. ENTER. NOW. I'm finding everyone's captions/dialogues vastly amusing, and, as we all know, I live to be amused. Plus, there is a cool prize.

In continuing the Dead Pets theme of the week, allow me to introduce you to Buster: 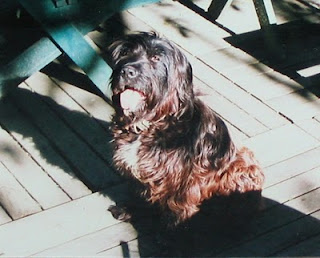 Buster, aka Boober the Wonder Dog, came into our lives shortly after TG and I were married. The Boobster's mother was a ginger-colored cocker spaniel who showed up on my mom's doorstep right before the wedding, gave birth to eight puppies, stuck around until they were six weeks old, and left.

If you ask me, that was one helluva well-trained dog.

We chose a black, curly-haired butterball, mainly because he licked us more than all the other puppies combined. We thought it meant he liked us. More likely, it was just that he couldn't contain that tongue.

The first night home, we put our un-housebroken puppy in the bathroom, in a cardboard box, with a pillow and a towel, and added a stuffed animal for company. But he missed his litter mates, and didn't hesitate to show it, employing the most heart-rending whines and whimpers to let us know he was not satisfied with any old teddy bear.

He wanted a heartbeat.

Now, TG and I had decided on a tough love route--we'd have to let him cry it out for a few nights. He'd get used to it, and eventually learn to sleep on his own. Seemed to be working pretty well, or so I thought. Until I woke up and realized TG was not beside me in bed. I found him in the bathroom, leaning up against the tub, asleep, with the little black fuzzball cradled under his chin.

That's when I knew TG was destined to be a good father. :)

Aaaah, Buster. What can I say about dear old Boober Dog? Well, look at that face: totally sweet, even if he wasn't the sharpest crayon in the box. 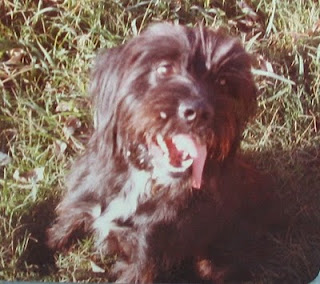 ~Buster would eat almost* anything, from the handles off of TG's prize set of screwdrivers to the contents of the cat's litter box. Even apples from the tree out back, but only when DD fed them to him. 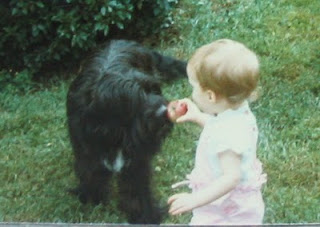 ~Crayons were his favorite. (See above crayon reference. Uh, yeah.) He once ate a whole box, and later decorated the yard with "Easter egg" poops.

~Buster peed when he got over-excited. Sitting on TG's lap always seemed to excite him.**

~The only person Buster ever bit was a politician who lived next door to TG's parents. (We found out later the man had a mistress, whom he beat regularly. Apparently Buster was a good judge of character.)

~Buster loved the water. He was also fiercely protective of our kids, whom I'm sure he considered to be his younger siblings. He felt obligated to stand guard whenever the hose was turned on out back. 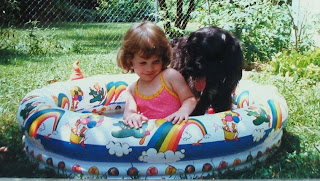 ~Buster died on our son's third birthday. Sadly, the only clear memory Son has of him is of the time Buster peed on the Slip-'n-Slide. (Hey, he was excited.) 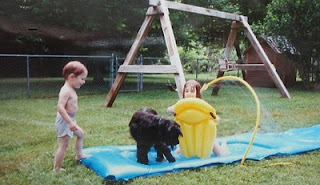 I miss you, Boober Dog. But I'm sure Doggy Heaven is more entertaining place with you there.


*The only thing Buster ever turned up his nose at were the biscuits TG made using the baking soda from the open package we kept in the fridge as a deodorizer. We were out of baking powder, and TG was forced to improvise. (We didn't eat the biscuits, either. In case you were wondering.)

I have EXACTLY the same story with Pythagoras and our first dog. We, too, had agreed to let the pup cry it out in the kitchen (which we'd barricaded w/ a baby gate). Woke to find Pythag sleeping on the kitchen floor with a very contented pup.

It's funny how much Buster and my 3yo have in common.

Last Xmas eve we had to put our tuxedo cat Chess down after his kidney's started to fail. To say we loved that cat is an understatement. He wormed his way into our hearts and shared a home with us for just under 19 years. Hubs and I got him the month we were married.

It can still catch me off guard when we are watching funny home videos and he waddles into the screen.

Man do I miss him.

I'm with them, I *love* the pet stories! I lovelovelove my dogs. I believe it was George Carlin who called them "little ticking timebombs" because you love them so intensely and know they won't be around long.

But GAH, are they worth it OR WHAT?

Kelly -- I'm so sorry about Chess. Clancy was 18 when when his kidneys failed. Maybe older--the shelter estimated he was 2 when we got him, but they couldn't be totally sure. Buster was almost 12. (Ugh. Now I'm sniffling again.)

Thanks for commenting, ladies! :)

That sounds like one precious pooch. I'm getting nervous lately, my very first dog is turning the big 8 (which is old for a bigger dog). I'm not sure if I'll be able to be as brave as you are sharing these stories when she passes.

SM -- Bear in mind, Buster died a fairly long time ago. I would've been a blubbering mess trying to talk about him too soon afterward, but time eases the pain, allowing the good memories bubble to the surface.

I hope your dog has many good years left. :)

We went through the same thing with a whimpering baby Biscotti. Six years later, she still sleeps in bed with us. *sigh*

When we got Bruschi, we figured we'd train them BOTH to sleep on the floor. For week, St.Matt Bru-pup and I slept on the ginormous - monogrammed - dog beg we bought for the puggles. Biscotti slept on the bed and looked down on us like we were morons.

Which, to be honest, we were.

I wonder if Bruschi and Biscotti realize yet how their world is about to be rocked. Buster was one confused pup for a while after DD was born. He "dogged up" quickly, though, and became her fiercest defender. :)

Posey -- I'm rather fond of them myself. :) I had so much fun digging (and I do mean digging--it was quite the excavation) for them.