And the final Now-Dead Pet: Sunny! 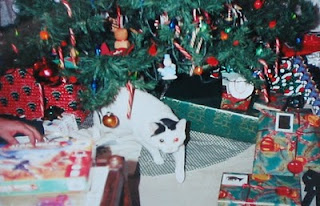 Sunny's full name was Ice Cream Sundae, because the kids thought she looked like someone had squirted chocolate sauce on her head.

A comedian who played TG's theater once said: "If you have two cats, odds are one of 'em ain't wrapped up too tight."

In our family, Sunny was that cat. She was high strung right from the get-go.

In fact, her favorite possession (and, yes, it was definitely her possession) was a string. She carried it around like it was her long-lost kitten, and put up a mighty struggle if you tried to take it away from her.

Never underestimate the strength of an 8-pound cat -- she always won. Because she never gave up. [Insert applicable Life Lesson here.] 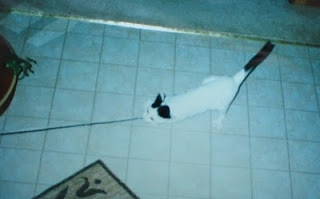 After an initial WTF (what the...er, fudge) reception from Clancy, the two of them became best buds. I think Clancy warmed up to her when she offered to clean his ears for him, and he realized she could be handy to have around. 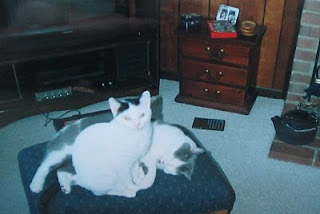 ~No Lego car tire was safe from her. She would find them, no matter how well-hidden, chew them up, swallow them, and then regurgitate them in inconvenient places around the house.

~It took Sunny a long time to become a lap kitty. At first, she would only lie down beside you if you pretended you didn't see her. She graduated from that to crawling onto your lap, but only if you were asleep.

~Exception to the above: if I was on the computer, she would jump onto my lap and demand attention. If I tried to remove her, she would dig in and hold on for dear life. If I stopped typing and gave her my full attention, she left.

~She loved to hide her toys (and anything else she could drag) under the welcome mat in the front hall.

~Houseflies trembled in fear of her hunting prowess.

Sunny was only ten when she died (young for a cat) of an intestinal disease. I knew those Lego tires couldn't be good for her...

Clancy only lived for a few months after Sunny left us. I think he missed her even more than we did. He just sort of gave up. Either that, or he was afraid he'd have to break in another kitten, and he got out while the getting was good.

I hate to cry. Go cheer me up with an entry in my Caption Contest!
Posted by Linda G. at 9:09 AM

I had a Jack Russell terrier for 17 years. For the last ten of those, he had a love hate relationship with Merlin our big rescue cat. Max loved Merlin, Merlin hated Max.

Max died almost two years ago of old age. Merlin was devastated. We got him a kitten and that helped a little, but Merlin still wasn't back to his old self. A few weeks ago I brought home a puppy. The puppy loves Merlin and Merlin acts like he hates the puppy.

Merlin is happier than he's been in years.

I brought tissues. Stories like these almost make me want to get a cat, then I remember horrible allergies and go cuddle with my dog so she knows how much I appreciate her.

Aww... what is it about the quirky/crazy cats that is so ridiculously endearing? My good kitty, the girl cat, April, is that possessive about strings too. But she DEMANDS that you drag them around for her, FOREVER. She doesn't get tired. We clocked in at a memorable nine and a half hours one day.

So now I store all her toys in the freezer. Sometimes you just gotta do what you gotta do. She calms down if she can't see them.

Just makes you miss them even more. Gussy (names after one of the mice in Cinderella) was persian tortie we rescued from some really dumb people. She was eight and she loved everyone. You gave her attention you were her friend. Being brushed was the best. We had her for 13 years before she passed and when she did she was 21 and could no longer see or hear. But she was home and for her, that was the best.

SM -- Sorry about your cat allergies. Dogs are just as nice to cuddle with, though. :)

Elizabeth -- Wow. Nine and a half hours? That's gotta be some sort of Guinness world record for string-play with a cat! We used to store our cats' toys in the cupboard with the canned goods. Otherwise, they'd drive us crazy, too.

Jessica -- Our comments crossed in cyberspace. Anyway, thanks for the hug! :)

I'm hoping we get a live animal series, to balance out the rainbow bridge!

Oh, poor Sunny!
We lost our beautiful black cat Maui last November and I still find myself looking for him, from time to time.

My husband and I knew we would never find another cat as personable and smart as Maui, so in our grief we went a little nuts and acquired a German Shepherd. We've never owned a dog before.

A dog is different ... like a permanent toddler who will never grow up.