It was the best of days, it was the worst of days...

It started out crappy. We had a hard and fast snowstorm Wednesday night, which meant before I could go collect Tawna Fenske from the airport for our Tweetup, I had to SHOVEL SNOW: 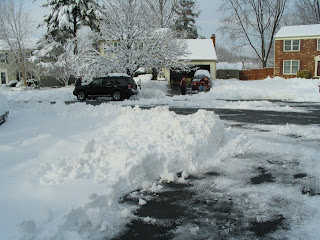 Most of you know I can't stand shoveling snow. TG usually handles the bulk of it, but this time he was sick (bronchitis--ugh). And so was our son (also bronchitis--he gave it to TG, after getting it from his girlfriend*). So I got to shovel most of the sloppy, gloppy, HEAVY stuff myself. Oh joy.

*Um, that's Son's girlfriend, not TG's. TG doesn't have a girlfriend. Yeah, I know better than to screw up antecedents like that, but I still do sometimes. If they make me giggle, I leave them.)

Back to my original chain of whining thought:

TG still insisted on coming out and wielding a shovel for little while, too, which was STUPID (yes, sweetie, I just called you stupid on my blog--deal with it) because he had a fever, and should have been resting up for the show.

ANYWAY, it was all totally worth it, because it meant I could get my arse to the airport and pick up Tawna! Her plane had been delayed, which is just as well, because the #$%& snowplow blocked our drive again, after I'd already hacked through the icy, hard-packed snow-wall they left the first time they came by, and I probably couldn't have made to the airport any earlier.

You guys! Tawna is just as brilliant as anybody who reads her blog would expect. Plus, she's easily entertained: 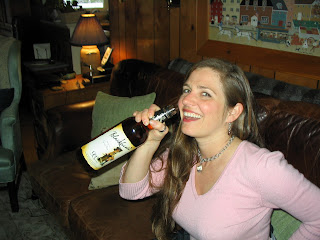 [BTW, Tawna says she & Pythagoras (her husband's alias) have the same sofa as we do. Exactly the same. AND we have the same agent. *cue Twilight Zone music* Now, if only we had the same boobs...*sighs* Sorry, TG.]

If you  can't read that label, here's a closeup: 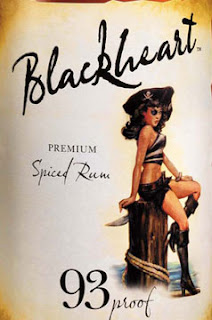 See, Tawna's debut novel, Making Waves (coming this August--I've had the pleasure of reading it, and trust me, you don't want to miss it), is a funny/quirky contemporary romance with modern-day pirates. I saw this bottle of rum in the liquor store, and immediately thought, Wow! Tawna should put on an eyepatch and pose like this for her own cover!

(Well, what I really thought was, Wow! That gal on the label puts the ho in yo-ho-ho! But I do think my cover idea is worth some thought.)

After a fun lunch at my favorite restaurant, we came back here to hang around until I--much too soon--had to take Tawna back to the airport. 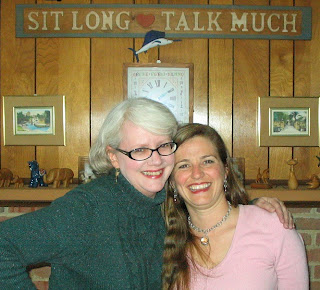 If you ever get the chance to meet Tawna--say, at a future book signing--jump on it. She's totally worth any snow shoveling you might have to do to get to her. :)