Everybody has them. Little, big, silly, horrifying -- they lurk in all our hearts.

Some people, I'm sure, will swear they have no secrets. But they're lying. To themselves, if not you.

Sharing secrets with someone is the highest form of trust. (Or idiocy. Take your pick.) 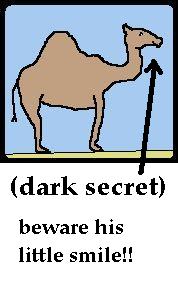 Our characters have secrets, too. Sometimes we share them with the readers, but not always. I know some pretty juicy stuff about my major characters that I'm not sure will ever come out in the book(s). And that's okay. It informs their actions, makes them who they are, and that's enough. If I can ever use the secrets in a "big reveal," so much the better, but they already serve their purpose.

Hmm. But I wonder if revealing their secrets might deflate them in some way. Make them hollow. Balloon characters instead of the real people they seem (to me) to be now.  I must ponder this more before I release any cats. 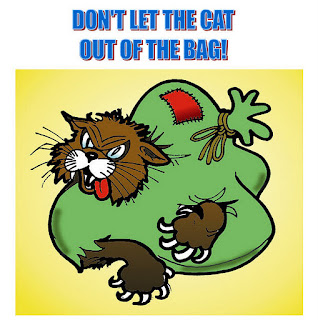 So, what's your take on secrets? Do they annoy you or pique your interest?

Do you have secrets? If you're a writer, do your characters have them?

Oh, and a brief cautionary message, if you're considering revealing any of your own secrets: 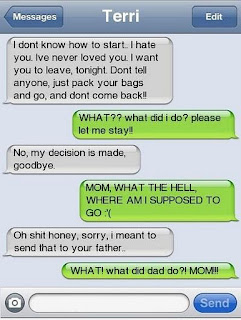 Just make sure you're telling your secrets to the right person... ;)
Posted by Linda G. at 8:17 AM

wow. i was all set to have a witty comment, but then reading that iphone screen shot blew my mind. poor kid. i'm glad i don't have those kinds of secrets!

Love DYAC, but I think that one has to be fake, don't you? Hysterical, though!

All my stories seem to be riddled with secrets and withheld information. Now I'm wondering what this says about me...

OMG, how did you get a screen shot of my phone?

I'm withe Jeffe, that DYAC is fishy...
Oh, I love secrets! My hero has a doozy, in fact I wrote his sketchy past before I knew much about him. It did get revealed, tho, it was too important not to share!

Part of the fun of reading is knowing there are secrets soon or perhaps never to be revealed, but enough clues for me to guess at what they are. I guess that's why I enjoy memoirs so much, there's so much underneath the surface that I can guess at.

Wow, what impeccable timing you have. I'm wrestling with just how much of my MC's deep dark secret she should reveal.... am revising last year's nano project. :)

When I wrote my contemporary romance REMEMBERING YOU, everyone had secrets and one by one they all came out. It worked for me in that particular book. I don't know if it would in any of my others. But I think everyone has secrets and they're good to hold onto.

OMG that text message is TERRIBLE.

Of course I have secrets, and there is exactly one person in the world who knows very close to all of them. My characters have plenty of secrets and yes, I think it makes them more real even if they never share them.

I don't mind secrets as a reader, although if I am aware the character is hiding something huge it would annoy me if I never found out what it was.

Secrets are fine, what I can't stand is the constant 'I know a secret, but I'm not telling you' thing. Either people/characters should tell their secret, or keep it's very existence secret. Although in a book, it's probably OK to drop a few hints that someone knows something.

My MC has a huge secret which she never tells anyone. The readers get to know on page one though, so it's not much of a cliffhanger :-)

Who was it who said 'a secret's only a secret if two people know it and one of them is dead'?

Sure, everybody has secrets, and it's rarely a good thing to push too hard for information we're better off not knowing. Nothing wrong with a little mystery about the people in our lives, right? Or the characters in our books.

Doesn't matter if that screen shot was fact or fiction...it got me grinning. And of course I have a few secrets...*wink*

wow...that last screen shot, ow. I would not want to be that kid.

Yes, I make sure my characters have pasts and secrets, but they rarely come out in their books. Mostly they have their secrets and only I need to know them, so I know what makes them behave and do the things they do.

However, in the book I am just starting, my MC has a big secret, but the reader knows about it soon-ish.

Bwa-ha-ha! That's a pretty funny exchange on the phone ... assuming it's fake.

I like secrets in characters, as long as the reader is given enough hints along the way to stay involved and connected to them.

But that's the trick, isn't it?

I am going through exactly this right now. What do I reveal? How much do I reveal? Those pesky characters make it so difficult!

Abby -- I hope it's not real, because that truly would be awful.

Jeffe -- It's from another site, but I figure it HAS to be fake.

Jessica -- I'm sure people make stuff up for sites like that. They still make me giggle, though. I'm an easy giggler.

Karen -- True. It is fun playing detective by reading between the lines, isn't it?

Patty -- Cool! Hope you're having fun with it.

Anne -- I think the art is in how you go about revealing the secrets.

Trisha -- I agree. It's annoying if you start to feel manipulated by the author, and if a big secret is dangled in front of my nose and never revealed...well, I feel like I'm being played.

Patsy -- Yup. That is annoying as all get out. A few hints to keep the pages turning is okay, though, I think.

Sarah -- LOL! Yeah, I think that's right. The only safe secret is one that's never shared with anyone.

Susan -- A little mystery is intriguing.

K-pop -- Ha! Me, too. I figure it's totally fake, but that didn't keep me from laughing.

Lola -- I think the more real our characters are to US, the more real they become on the page. The reader only sees the tip of the iceberg. We see the whole thing.

Dianne -- Exactly. It's like a good strip-tease -- more intriguing than instant, stark nakedness.

Jeannie -- Thanks! Good luck with your character strip-tease. ;)

This is not a secret but the twitter thing reminds me of it and it is so funny I almost peed my pants at work.
I've been working at a new job for 3 weeks now. A coworker in the cubicle on my right started a week later than me. I'll call him Joe.
I'll give our fabulous supervisior (seriously, I love her) the fictious name Lola.
So yesterday Joe says to me, what is Lola's email address? I looked at him like he had two heads because I have to email Lola beginner questions at least 5 times a day. How can he not know her address?
I told him and he said, I've been emailing the wrong Lola. No wonder she never answered me.
I just about died laughing.

Did you get it or did you have to be there?

I'm getting addicted to your hump days!

JJJ -- LOL! No, I got it. Too funny. I'm just surprised it took him that long to figure it out.

Of course my characters have secrets! I've been accused of holding them from the reader tooooo long, but those same people tell me they couldn't stop reading until they knew...so there ya go;) Do I have secrets? ...maybe

Hell yeah, the got secrets. That's what makes them interesting. The best part is when they wait until I am 2/3rds way through the write up to let me in on their little secrets. Sometimes that really pisses me of. (Can I say that on your blog?)