Hot Dogs and Burgers and Reruns, Oh My!

[I ran this post originally last Memorial Day. Since most of you probably haven't seen it, I thought it might be worth a repeat. Plus, I'm lazy, and didn't want to write a whole new one.]

Memorial Day! Bring on the burgers and hotdogs, the potato salad and cole slaw, the beer and wine and soda! Prepare to celebrate the Great American I-Am-Not-At-Work Day!

(Well, unless you're in retail. Or serving the public in a job that doesn't rest on holidays. If that's the case for you, let me say thank you for all you do. Also, sorry about that!)

And all of us, whether we're playing or working, should spare a passing thought or two for the members of our armed services, past and present, who made/make it possible for us to do whatever we do in safety and freedom.

Thank you, son-in-law. Your service in the Navy is important.

Thank you, DD, for your volunteer work with the Civil Air Patrol. That's important, too.

And a special thank you to family members now gone, like my father, who served honorably in Korea. And my husband's grandfather, Old Pap (you might remember him from this post), who got special permission to join the Army at age 40, when WWII broke out. He went in as an officer, and served throughout the campaign. As soon as the war was over, he wrote his own orders to get out, had his superior sign them (yes, pretty much nobody refused Old Pap what he wanted), and went back home to his wife and son.

His service staff loved him. Here's a gift they gave him shortly before he left: 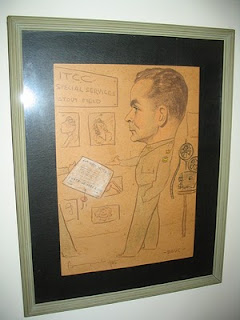 It's a caricature of him. The certificate he's being handed by the bodiless arm says "Honorary Member...blah, blah, blah...I Hate Grimes Club." I'm fairly sure that part was ironic, because nobody could hate Old Pap. Or, if somebody did, surely they wouldn't be stupid enough to present him with a commemorative drawing stating the fact.

Anyway, we have it hanging in our upstairs hallway, a reminder of him that makes me smile every time I pass it. It's a virtual snapshot of a man in his prime, during the time of his life that defined him.

Old Pap was, well, old, by the time I met him. Old and infirm. He walked with a cane, breathed with difficulty due to his emphysema, and was sometimes hard to understand because he only had half a tongue (don't smoke!). But I am happy to edit my memory of him to include his earlier, stronger period, using, among other things, the caricature he was so proud of to overlay strength onto my mental image of the grandfather I came to love.

In a way, all our memories are caricatures of life. Our minds pick and choose what to highlight, exaggerating the bits and pieces that stand out to us for whatever reason, good or bad. No way could our brains store every little detail without our "hard drives" filling up too fast. And (sadly) it's not like we can go to the local big box store for an upgrade.

(Though wouldn't that be cool? I would SO do it!)

Maybe that's why I'm so fond of caricatures as an art form. Via a few deft strokes left by a speedy hand they reveal the essence of a person.

Here's another favorite of mine--our kiddos, when they truly were kiddos, at the beach one summer: 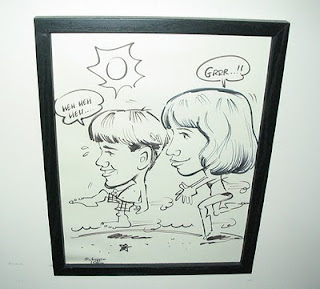 The artist really captured both of them. I look at this and see the children they were AND the adults they've become, somehow melded. It makes me smile, too.

Looking at these pictures got me thinking. I know writers are supposed to strive to make their characters more than "mere" caricatures. And I know what is meant by that--the people you create on paper should come across as real, three-dimensional individuals, not flat, cartoon-y renderings.

But I think an exceptional writer, like an exceptional caricaturist, can achieve a kind of three-dimensionality of spirit--as I said earlier, the essence of a person--with a few well-placed lines. No need to always drag out the oils and go for the full Dutch Masters treatment.

Sometimes a subtle, well-executed "caricature" in print can set a character in the reader's mind more effectively than pages of description, no matter how deathless the prose. And isn't that the point? To write memorable characters? I'm not saying it's the only way, or even the best way. But it's a way. :)

I think his service staff must have LOVED him to give him a commemorative drawing like that. :)

I LOVE the caricature of Old Pap! That's so awesome. Hubs and I have a caricature of us from when we first started dating. It's probably my favorite picture of us. (Mostly because we're normally very goofy, so the caricature kind of captures us in our "normal" environment.)

Dianne -- Yeah, I get the idea he was pretty well-loved by everyone who knew him. :)

Jen -- It's one of my favorites, too. I just love caricatures. And goofy is good. :)

So cool! I love caricatures and treasure the ones of my kids as well. Salute to old pap!