Kitties and Goats and Defrosted Daughters, oh my!

So, DD is visiting. She brought our two grand-kitties with her, since she'll be staying a few weeks.

The cats are confused. They love me (naturally; what creature wouldn't?), but I made the mistake of cuddling with our part-time neighbor cat before they got here. And then the bigger mistake of not changing my clothes afterward. It seems my precious grand-kitties think I've been cheating on them with another cat (which, granted, I have), so they are alternately rubbing up against me and hissing at me. But they are cute, so they are forgiven. 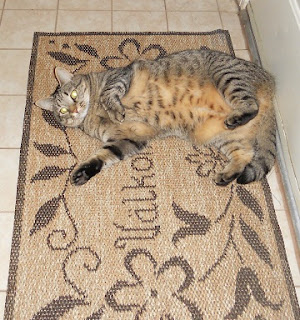 And here's her awesome sister, Vera, reaching out to hold hands with DD: 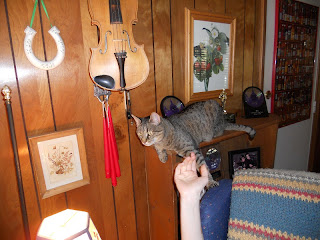 Who wouldn't forgive them? Well, except Part-Time Neighbor Cat, who has been banned from the house for the duration of the grand-kitties' visit: 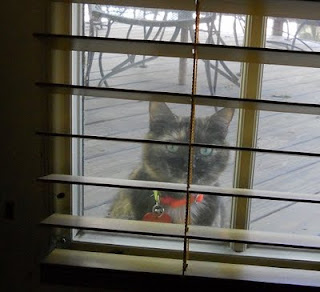 Awww. Everybody say it with me: Pooooor Miss Kitty!

While Hissy Cats were having a time out in their room*, DD and I went to Wegman's in search of Kosher-for-Passover matzah**. Which -- horrors! -- they were out of. Wegman's, you let me down.

But they did have wine! With goats on it! We'll take it to DD's in-laws' tonight for Passover Seder, because there's a lot of wine-drinking involved in a Passover Seder (is that a great religion or what?), and there's some sort of a goat song involved. So we thought the goat wine would be appropriate.We are nothing if not appropriate. (Oh, all right. We also thought it would be kind of smart-assy, but since DD's in-laws have a great sense of humor, we know they'll appreciate it): 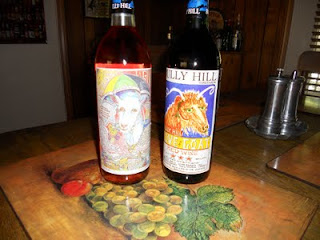 The checker, a young Asian man who looked about twelve, actually carded me. Ha! I haven't been carded since I was 35 or so, which is at least *cough* two years ago.

"Your ID," says the checker, embarrassed.

"No problem," says I, digging out driver's license, thinking, are you blind, kid?

I was still giggling on the way out of the store, until DD kindly pointed out that if I were under twenty-one, apparently I'd had a hard life.

Yeah, I know. And yet I didn't leave her at the store. That's motherly love for you.

(DD wants me to mention that she gets her smart-assery from me, so I shouldn't complain.)

Kind of a scattered post today, I know. What can I say? I'm a little distracted.

What has you distracted these days? Something fun, I hope!


*Yes, the cats have their own room here. It was DD's room when she still lived with us, but she now stays in the guest room when she visits, so the cats get hers. Someday, when I stop writing long enough to do a little redecorating, it will be transformed into my writing haven. But it will likely still have a litter box.

**Yes, DD is Jewish. Though she was nominally raised Episcopalian (I fear we didn't go to church...well, religiously, so to speak), she became interested in Judaism in college, and decided it was the religion for her. Since Episcopalians are, due to their legendary reserve, often referred to as "the frozen chosen," and Jews are considered "God's chosen people," TG and I figure she didn't so much convert as defrost.

(If you're interested in a more complete explanation of the process, you can read about how I became an honorary Jewish mother here.)

Two of my college roommates were (are) Jewish, and after my first Seder, I wanted to be Jewish, too...but then I found out the Catholics get to drink a lot, too, so I went that direction. A different Fish Fry every Friday in Lent is a big draw for me...

Aww...those kitties are so precious! :)
I totally have tried and love "Love My Goat" wine from Bully Hill! I tried it when I was up in NY in the Finger Lakes region. It's a great red for BBQs!

I wish my in-laws felt so lovingly about their grandkitties. :) Of course, that's the kitties' fault, not theirs...


"Since Episcopalians are, due to their legendary reserve, often referred to as "the frozen chosen," and Jews are considered "God's chosen people," TG and I figure she didn't so much convert as defrost."

aww, such cute grand-kitties you have. my mother has grand-dogs and one grand-cat who actually thinks he's a dog :)

Have a great visit with the grand-kitties. And your thawed-out DD.

Have fun with your daughter...seems like you are on your way! My parents only have granddogs, so they've taken to them as well. Of course, my dogs are impossible not to love ;)

Happy Passover, bb! And I know you'll enjoy the seder, with your goat wine...

bully hill wine! so good! my friends went to the vineyard, i believe it's in upstate NY (syracuse, maybe) and so i've had the privilege of drinking bully hill. you're in for a treat tonight!

Ya did it again! You made me smile again. Especially love the line about your daughter not so much converting as defrosting. That is absolutely priceless! Know what? You should definitely write a book ...! Enjoy your seder.

For a second I thought where the kitty was holding hands, that she was actually jumping through the air. Pet visits with the grand-fur-kids are very important.

I have never came across a Jew. Glad to hear that people have the reason to choose their own religion and parents accepting it with out creating any fuss.

Your blog humour defrosts my minor moods every time. Love the 'frozen chosen' description but watch cats or you could end up with 'bitter litter' anxiety after bedroom inspection! My own humble problems with my 'cat on a Hot Tin Roof' pales in comparison.Meow!!

I need to pay you to start writing my blog post titles. How could I see this and NOT be compelled to read and comment? Brilliant. Also, I would like some of that goat wine. Mine is boring and only has pictures of grapes on it. Hope your DD enjoys her stay! :-)

You're my sister! It's obvious that you're really young (I mean, since I'm so young, too!). Why would you be surprised that they asked for your ID? ;)
And pooooooor kitty!

I love the wine with the goats on them. I am not Jewish but I love the latkes at Christmas.

And tell the cats to just get along already.