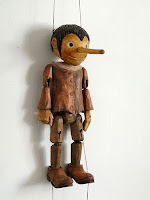 We've all done it. Bent the truth a bit. Told a little white lie. Fibbed.

Fibbed. Isn't that a great word? It sounds so fun. Lighthearted and happy. Not really like a LIE at all. More like something that should be true. That, in a better world, would be true. "Truth light," with a wink and a nudge built right into it.

Kind of a "you and I both know this isn't precisely factual, but we'll pretend it is because it makes us both feel better" sort of word.

As a writer, I like to think of fibbing as "editing actuality into a more acceptable draft." Doesn't that sound better than "a big, fat lie"?

I don't mean the big issues. Basic honesty is a must if there is to be trust between people. What I'm talking about are those little, relationship-smoothing fibs that are not only accepted, but expected.

There's a subtle, yet meaningful, difference between fibbing and lying.

"You haven't changed a bit!"

"Don't worry if you broke [insert priceless heirloom of your choice]. I never liked it anyway."

"Wow, that pink stripe in your hair makes you look COOL!"

"It wasn't me who scratched/dented/released a skunk in your car."

"I didn't shave your cat and feed it Ex-Lax. Tommy did."

You also have your CLASSIC LIES:


You see the difference, don't you? A FIB is told for the benefit of the person you're fibbing to. A LIE is told for your own selfish reasons.

Now, some of you -- the loop-holers among you -- are probably thinking, but it would hurt people to know you scratched their cars or cheated on them. That you're only warping the truth to spare their feelings, so why doesn't it count as a benevolent fib?

Nice try. Sorry, but a fib is only a fib when you're not covering your own ass with it.

There are gray areas in between telling lies and telling fibs, of course.

Say you tell your best friend, "Those jeans look fabulous on you!" when, in fact, they make her rear end look like two Volkswagon Beetles trying to pass each other on a narrow road.

Now, if you're shopping when you "edit" that particular actuality, and she hasn't yet made the purchase (i.e., there's still time to save her from herself), you are lying to her. Bad, bad, bad. Friends don't let friends buy unflattering jeans.

But, if she just showed up in public wearing them, and there is no place for her to change, and you honestly don't want her to feel self-conscious, then it's a fib.

When I'm reading, I can't stand a character who lies. But one who occasionally fibs? Well, I find that rather charming. Something I try to remember when I'm writing, too.

I just had this conversation with someone recently. My problem is I can't lie, or fib. Well, I should say, I only fib to my mother. Because, well, if she knew the whole truth, let's just say even at 48, I'd still get my mouth washed out with soap.

However, my characters lie and fib all the time. I think it adds to their development of growth and change over the book. And can have some deep impact when they get caught.

i'm listening to the third book from Meg Cabot's PRINCESS DIARIES series and the MC mia is constantly saying how she's lying about this or that, but after reading this post, i can see that she's fibbing. however, her saying that she's lying is for comedic effect, and yes, it works. interesting twist, no?

I've never been much of a fibber or a liar (though I've certainly flat-out lied several times to my parents), but my husband is a world class fibber, or more precisely spinner. He spins things ever-so-slightly so that they sound like the better thing to say. Fortunately, he doesn't try that crap with me. I can always tell when he has "lie mouth," as I call it--just a certain set of his lips when he's trying to keep a straight face. :)

I grew up a HUGE liar, although to me I was just spicing up stories to make them more interesting. Sounds a lot like writing, doesn't it?

I agree with you. When there's nothing to be gained from the truth but hurt feelings, it's best not to say anything or to say something as nice as possible. This includes truths that are told ONLY to make yourself feel better, too.

And no one would ever lie about how cool the pink stripe in your hair looks.

I don't lie but I definitely fib.

Like when my friend asked me if I liked her new outfit and I said it was nice. Fib, fib, fib, fib!!!

No fib - I've missed reading your blog lately!! Had to stop by and say hello and thanks for your good wishes on my exam tomorrow. Hope I'll be back on a regular basis again soon!!

Fibbing? Hmmm yes, I perfectly keep track of those little buggers. Not. It's just hard not to fib when people ask your opinion and you know it's a strong opinion waiting to bite them on the nose.

I told a professor yesterday you look how I feel...which granted they were jet lagged to hell I happily told them oh no you don't look tired. I think it helped them feel better in the lecture afterwards.

Actually, I find a character who lies can sometimes be very interesting. (Although maybe I'm only saying that because one of my very favorite own protagonists lies all the time, trying to protect herself) Still, a habit of lying can sometimes bring an interesting depth to a character -- does she lie out of greed, boredom, acquisitiveness, fear, etc??

Of course, a character who pathologically tells the truth can also be interesting. I tried that too, after the lying character, just for something a little different.

I'm not much of a liar, but I can fib like a son-of-a-gun if it spares someone's feelings. Used to know a guy who was a world class liar, though. For no apparent reason, he was forever spinning these fantastic tales about himself and his exploits. And I was foolish enough to believe him, until my husband set me straight.

Actually, my current MC is scrupulously honest, to the point of being tactless. It's interesting how that gets him in trouble almost as much as the dishonest are nailed by their lies. Also interesting is the way he massages his conscience the very few times he does lie--he always tells himself they're fibs, but his reasons are actually selfish.

My journalism teacher used to say "don't let the facts get in the way of a good story" -- I think that applies perfectly to what writers do!

I too hate characters who lie. What I really frustrates me is when the MC or the character that I identify with most tells self-sacrificing kinds of lies. As in, "I'm going to lie to him to protect him, even though if he believes my lie it'll break my heart." It makes me want to throw the book across the room :)

But then again, as a reader I tend to forget that characters have to make mistakes, otherwise it'll be a boring book :)

I am the WORST liar and fibber. I try to fib to spare someone's feelings, but I still feel guilty because I'm not telling the truth. A couple of years ago I planned a surprise b-day party for my husband and afterward I said I would never do it again. Lying/fibbing was so stressful!