You can thank Jeffe Kennedy for inspiring (or perhaps I should say "instigating") what follows in this post. She's the one who double-dog dared me, during a twitter exchange, to write a blog post about the titular (I just love that word--it sounds so titillating (hey, there's another one!)) subject matter.

(Why, yes, I am feeling rather parenthetical this morning.)

Of course, it's equally Sierra Godfrey's fault. She's the one who, in an effort to cheer me up (as you may recall, I was having a rather peevish Monday), reminded me that at least I didn't have "a partially-formed conjoined-but-dead twin growing out of your neck. A plus!"

(I'm forced to agree with her point. That really is a plus.)

Kristina  and Gretchen joined in the conversation, too, so I suppose they should get some of the blame credit. Thanks, ladies!

*ahem* Since I am not one to back away from a Double-Dog Dare, I give you the following:

Two Heads Are Better Than One
There once was a woman named Fred
Who'd an extra, much smaller, head.
With a scarf she did cover it,
Taking care not to smother it,
Even though it was already dead.

*bows* Thank you, thank you verra much... (Sorry. Channeling my inner Elvis there.)


Or, in keeping with the theme, if you prefer something from the animal kingdom: 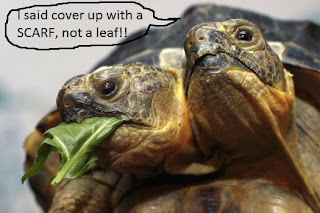 And lest we forget it's HUMP DAY: 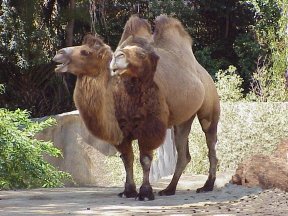 (Yeah, I know. This post was a little macabre. But we ARE coming up on Halloween, so it's kind of appropriate, right? RIGHT?)
Posted by Linda G. at 8:01 AM

ummmmm. yeah, macabre is right. and the conversation that sparked this must have been truly fascinating!

Wow. Thanks, Sierra & Linda. THAT IS SOMETHING TO BE GRATEFUL FOR. LOL, great post!

I'm trying to recall now what the reward is for completing a Double-Dog Dare challenge. Do I do your homework for a week?

Woman, you amaze me!!! You're quite the limerick-maker. :)

But have admit, the image of what lies under the scarf...creeped me out all day. Lol!

Um....yeah. I'm thinking I missed one helluva a convo. Where I was when this happened?!?!!? *never leaving Twitter again*

Oh, Linda. Thanks for being you.

Well, I must say, I do think the conjoined twin comment cheered you up, no?

I think Jeffe came up with the fabulous word for what lurks beneath the scarf..."teratoma" -- fantastic word.

And what an appropriate limerick!

As for being macabre, I apologize, but I do think that stuff is hilarious.

I actually wrote a short story that was published in Under the Sun about a woman with a teratoma. See how twitter flocks us together?

Oh I thought for sure this was going to be about rocking *the scarf look*, well, it IS in a way i guess, and I'll never complain about it again!

Tara -- Ain't it, though? You never know what inspiration will strike you while Twittering.

Jessica -- Glad it struck your funny bone, too. :)

Jeffe -- I'm pretty sure you have come do my laundry for a week. That's "home" work, right?

Karla -- We could've used you in that convo. Yes, you'd better never turn off Twitter again.

Demery -- Thanks. I try to be other people on occasion, but it never works out well.

Sierra -- Well, yes. It did. But then, I have a warped sense of humor.

Jeffe (again) -- Now, I'll bet that is a great story. It's like Twitter mysticism (Twysticism?) brought us together.

pseudosu -- Uh, no. No danger of that. I have NO fashion sense.

HA! I'd love to have a limerick-off with you after a few beers...

First: How are you always the first comment on, like, every blog I stumble across? That is verging on supernatural at this point.

Second: I shouldn't have looked at those pictures before going to bed. CREE-PY.

Are those for real? I feel so sorry for the poor beasties!

You are truly skilled with limericks. I've been trying to think of one every since reading your last limerick post.

Elizabeth -- Ha! Well, I do my blog reading first thing in the morning, when I'm still too bleary-eyed to work on my actual writing. That likely accounts for it.

Elisabeth -- Can't be certain about the camel but the turtle is for sure. Ain't Mother Nature weird? And thanks, re the limericks. Simple & naughty seems to be my poetry style. ;)

Sierra sent me. You have a truly demented sense of humor. I love it.