A Wednesday Wink at the World, Plus a Little Rockabilly Noir

All you're getting from me today is wink... 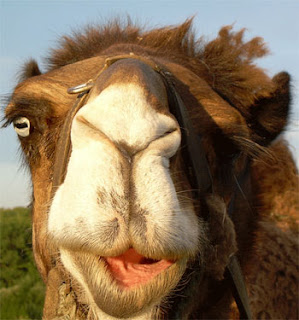 Source for winking camel photo here.
Because I am way too engrossed in my pal Vicki Pettersson's latest book, The Taken, the start of her new Celestial Blues series.
Get a load of the cover: 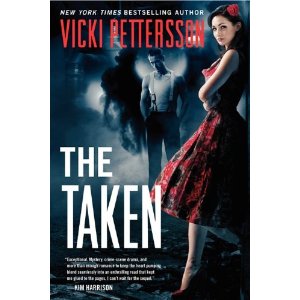 Gorgeous, yes? I'm gonna have to get me one of those. (Relax, TG. I'm talking about the dress, not the guy.)
But if beauty alone isn't enough to entice you, here's the book description:
Griffin Shaw used to be a PI, but that was back when gumshoes hoofed the streets . . . and he was still alive. Fifty years later, he's an angel, but that doesn't make him a saint. One small mistake has altered fate, and now he's been dumped back onto the mortal mudflat to collect another soul—Katherine "Kit" Craig, a journalist whose latest investigation is about to get her clipped.
Bucking heavenly orders, Grif refuses to let the sable-haired siren come to harm. Besides, protecting her offers a chance to solve the mystery of his own unsolved murder—and dole out some overdue payback for the death of his beloved wife, Evie.
Joining forces, Kit and Grif's search for answers leads beyond the blinding lights of the Strip into the dark heart of an evil conspiracy. But a ruthless killer determined to destroy them isn't Grif's biggest threat. His growing attraction to Kit could cost them both their lives, along with the answer to the haunting question of his long afterlife . . .

Sounds fun, doesn't it? Pardon me while I go get lost in the rockabilly-noir world Vic has created. I am LOVING it so far. YUM!

Question 1: What's making you wink at the world today?

Question 2: Can you believe I found a winking camel?
Posted by Linda G. at 6:48 AM

When it comes to camels and you I would believe many things.

That does sound like a great read, and I LOVE her dress!

I'm not sure I have a wink in me today. Maybe a squint.

I love your camels!

Oh, you know what I mean!

Is it sad that when you said gorgeous, you're going to have to get one of those, I thought you were referring to the book???

what's making me wink today? well, a raindrop fell in my right eye, which startled me and i closed it. that's a wink, right? #silverlining

Sorry to be a downer, but today sucks for me:( Boo! But I did smile at your camel and I'm not in the least surprised you found him! That book sounds great!

I'm actually shocked that you don't have an entire file of winking camel pics. And a little disappointed, to tell the truth. ;)

I'm sorry, I forgot about the camel because I was caught by the book description. That does sound good.

And of course you have a picture of a winking camel. My mind shudders at the thought of the camel pictures you probably have tucked away. :-)

You crack me up!

I LOVE that cover! The dress in particular :)

I'm winking at the world today because I'm so tired my eyes keep closing one at a time ;)