Guess what I did over the weekend! Go ahead, GUESS!

Which reminds me of the poems I, along with my fellow Air Force brats, used to recite to the new recruits on base when we were kids:


Roses are red,
Spinach is green.
You have a nose
Like a B-17.
(Hey, there's a reason we were called Air Force brats.)
Anyway, if you guessed "The air show at The Virginia Military Aviation Museum," you'd be right. The show was called "Warbirds Over the Beach," and it was amazing! Seeing all those old planes in person, and watching some of them fly, was an incredible experience.
My favorite part? The 84-year-old pilot who flew the Corsair. Wow! In-effin'-credible! Truly an inspiration.
Not only were there loads of airplanes, but there were also WWII reenactors wandering around in the uniforms and clothing of the era, with encampments set up on the grounds. Even our allies were represented: 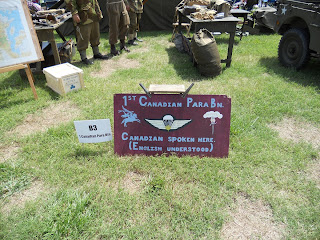 If you can't read that sign in the pic, it says "1st Canadia Para Bn. Canadian spoken here. (English understood.)"

Have you ever been to an air show?

Have you ever made up an inappropriate poem about a body part?

Would you like to? Please feel free to leave one* in the comments!**


*A poem, I mean. Not an air show. It would be tough to leave one of those in the comments.

**Risque acceptable, crudity not. Not that I wouldn't likely guffaw (loudly) at the crude ones, but out of consideration for my more genteel readers.
Posted by Linda G. at 7:40 AM

My mom used to take me to air shows when I was little. She always wanted to be a pilot. Alas, it wasn't to be. My son, however, is also an airplane geek, particularly with the old war birds, which makes his grammy proud. He learned to read using Jane's (I'm not kidding). Now he and my husband go to an air show every year. Some kids get autographs from celebrities; my kid gets autographs from the Blue Angels.

Cool! Yes, I've been to a few airshows. My brother is in the Air Force so he took me to my first. :)

Never been to an airshow, but took my Girl Scout troop to visit Otis Airforce base and sit in a blackhawk helicopter - their favorite part was putting on the "Top Gun" gear.

We live right alongside Wright Patterson Air Force Base - home of the National USAF Museum - so we get some great shows. Plus all those planes flying overhead every day.

I've got a lot of jokes floating around my mind about body parts but, alas, no poems.

i've seen an airshow or two in my day. i wish i'd seen more. they're so breathtaking!

You're playing my husband's favorite song! Air shows are his favorite thing. He's an aircraft mechanic who cut his teeth on WW2 T-6's, a whole squadron of them called The Skytypers who are now under contract with Geico. They write ads in the sky with 6 planes. These planes are SNJ-2s and are frequently used as Japanese Zero substitutes whenever Hollywood makes a movie :) They have a very distinctive engine buzz that my husband can hear from inside my house. He'll grab a lawn chair, head outside and wait for them to fly overhead.

We've been to the EAA show at Osh Kosh, a few shows at Sussex, NJ, and now, every year, there's a show on Memorial Day right here on Long Island on the beach.

My husband's built F14's and a few other Grumman planes, repaired helicopters for radio stations, and now keeps the big boys flying for American Airlines... for as long as American remains open.

I have not made up any inappropriate poems about body parts, but did once write an entire short story about my son's hands :)

FUN! I went to an air show once AGES ago and I barely remember it. But I know it was super exciting.

All the poems I can come up with are mean. And... I'd feel bad posting them!! Um... Here's the least mean one I could come up with on the fly.

Roses are red
Violets are blue
Your smile would be prettier
If your teeth weren't so few.

Just a disclaimer: I had NO person in mind when I wrote that poem. My friend's cat had some of his teeth removed recently, and he's been on my mind recently... Because I'm worried about him, NOT because I want to make fun of his missing teeth, ha.

We've been to a number of really cool air shows. Love seeing the WWII dog fight reenactments, and the pyrotechnics some of them use, but my very favorite thing was seeing a pair of B-1s flying over. Patriotic music was playing in the background, of course. First, they did a slow pass, and then they did a ***fast pass*** that made ya "Proud to Be an American". I swear, they were moving so fast, they'd already zoomed past and out of sight before we heard their roar. Amazing!

My dad was a frustrated air force pilot (colour-blind, so they wouldn't take him), my husband is an air force brat, and I like most things moving and mechanical, so I've been to a lot of air shows.

Unfortunately, air shows are becoming few and far between here in Canada because of skyrocketing insurance rates - the venues can't afford to do the shows anymore.

And I'm not going to give you any poetry about body parts. You already know where that would lead. :-)

I've seen a couple of Blue Angel shows.
And I've written a poem or two about body parts.
Of course, now that you put me on the spot I can't remember them.

Sounds like fun! No, I've never been to an airshow, and I have no excuse, since there's a local airport which has them all the time.

Bah. Wish I had time to make up a naughty poem, but I'm almost out the door for work.
Thx for the air-show pix. Used to go to these as a girl, with my Grandpa. You brought back sweet memories, Linda. :)