When I woke yesterday to the jackhammer musical stylings of a woodpecker on the chimney cap I should've suspected my day was not going to go well. I mean, sure, it had a good beat, but could I dance to it?

(Not that I ever feel like dancing at 0-dark-thirty in the morning. Puh-leeze. I like to ease into my day at a leisurely pace, not even speaking--beyond a grunt to the theater god--before a strongly-brewed cuppa good black tea.)

And the chicken-sized woodpecker was just the beginning.

(Allow me to interject here: OUCH!)

It has to do with the winter that just keeps on giving.

You may remember this post I made in February, after Mother Nature's little Eff-You birthday present to me:


The shovel-out from that was all sorts of fun. But what it left behind was even jollier. Broken branches by the score, just waiting to ruin a warm spring day. Apparently pine trees don't like to be laden with tons of gloppy snow for days on end. Huh. Who knew? 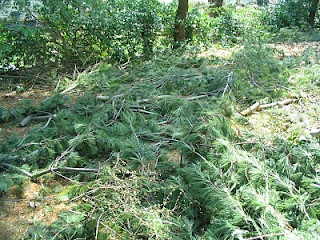 And that was just a small part of the whole mess.

The theater god and I had a choice to make. Pay somebody grind it up and haul it away, or do it ourselves. IOW, $1500 for the pros, or $99 to buy a chainsaw at Home Depot. Since we already have a chipper/mulcher for dealing with the leaves in the fall, we decided to go with the chainsaw & sweat, and save the $1500 for something fun, like groceries.

It was the right choice. Not only did we save a nice chunk of change, but I've also gotten rid of the nasty exercise deficit I had been living with after the long winter indoors. I am officially in the exercise black. In fact, after a few minor run-ins with wayward tree limbs and dropped logs, I am in the exercise black and blue!

OUCH. (I know. I repeat myself. But then again, so does the pain.)

The sad thing is, I didn't even get to play with our new toy! For some reason, TG doesn't trust me with a chainsaw. I mean, just because I can't operate the toaster oven without setting it on fire, does it really follow I'll cut off an appendage with a chainsaw? I don't theenk so!

Be that as it may, I spent the day hauling branches to the chipper, stacking our new logs on the woodpile, and spreading our new mulch around the needs-mulch areas of the yard. (See? That was another plus. Now we don't have to buy mulch this year.)

And I'm sure, given a week or two to recover, I'll even be able to walk upright again.

Aw, MAN! Between you and V I'm seeing black and blue all over!!

I saw about V! Thank goodness she's okay. And I just bruise easily, so there's nothing too terribly wrong with me.

It's raining today--hooray!--so the rest of the clean-up will have to wait for another day. (There was too much to get it all done in one day, alas.)

Ouch is right! I'm not allowed to use our chainsaw either. Or the power saw.

I think theater god and St.Matt are conspiring... to keep all of our fingers and toes attached. Good for them.

Hi Tiffany! I guess TG and St. Matt would both rather have whole wives than pieces of wives. Can't fault them for that. :)

LOL! It's the opposite in our family; my husband tries to get me to use the chainsaw and I refuse. I'm happy to pitch and stack the logs.

Deb, I'm with you on the tea--laced with ibuprofen. I do believe I'm going to live. Don't think I'll ever switch to a career as a landscaper, though. ;)

For some insane reason while I was pregnant with my daughter power tools fascinated me. My then husband, came home one evening to find me in the bathroom with a power saw cutting molding strips. And that was after wallpapering the entire bathroom.

Thankfully I've since given up that love. If I remember correctly I put a dent in the side of the tub with the saw. (Hugs)Indigo

Hi Indigo! Yes, women will do some amazing things when they're pregnant. I think it has to do with the "nesting" instinct. Thank goodness it doesn't last long after the babies are born. ;)

Wow. I'm a little disturbed by the idea of you wielding a chainsaw. Did you wear a hockey mask and cackle?

Tawna--Nah. Wouldn't want to frighten the neighbors. They've been looking at me kinda funny since the nude moon-bathing incident as it is.