Welcome to those of you who've clicked your way over to my little corner of the blogosphere by following the breadcrumbs on the Pay It Forward trail.

It all started with the fabulous Elana Johnson and her brilliant idea to spread some hope and promote debut authors the first week of April. As my contribution to the project, I'm interviewing Tawna Fenske, a wonderfully talented author who just happens to be an "agency sistah" of mine at Wolfson Literary Agency.

I met Tawna online through our brilliant agent, Michelle Wolfson. During my first phone call with Michelle, she mentioned Tawna as one of her authors she was sure I'd hit it off with, and she was right. Tawna and I share a similar (some might say warped) sense of humor, and we've been cracking each other up ever since Michelle tipped us off to each other's existence. After some of our Twitter exchanges, it is *cough* barely possible Michelle regrets bringing us together.

But it's too late now. Bwah-ha-hah!

Anyway, this is Tawna: 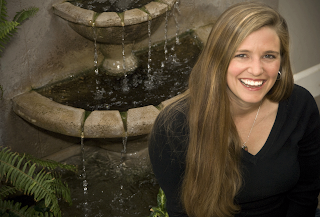 Isn't she lovely? If she weren't so dang nice, I'd be jealous enough to spit.

Tell us a little about your book.

Tawna: I write quirky romantic comedy, and my amazing agent just landed me a three-book deal with Sourcebooks, Inc. They’ve set an aggressive publishing schedule with all three books coming out in a 12-month period starting August 2012. Two are already written, but we’re still waiting to hear which will be published first. Most likely, it will be MAKING WAVES:

There are normal ways to cope with job loss, and most don’t involve plotting a revenge-fueled diamond heist in the Caribbean with a crew more suited to the boardroom than the poop deck. But Alex isn’t feeling very normal when his unscrupulous boss kicks him to the curb, and Juli hasn’t felt normal – well, ever. Losing themselves in their high-seas adventure – and losing their hearts to each other – Alex and Juli find that while normal is nice, weird can be wonderful.


Can you tell us a little bit about your road to publication (finding an agent)?

Tawna: I assume you want the short story? That goes something like this:

I started writing fiction in 2002, targeting Harlequin/Silhouette’s Bombshell line of action/adventure novels for women. I got “the call” in March 2005 from an editor buying my book, and I got “the un-call” August 2006 informing me the line was being cancelled one month before my book was set to hit the shelves (yes, I got to keep the advance; no, I didn’t get anything for the two follow-ups I’d written by then). I switched gears and wrote a romantic comedy/mystery that I used to woo agents, and ended up with four offers of representation. The agent I chose turned out not to be the right fit, so we parted company after a year. A month later, I signed with Michelle Wolfson of Wolfson Literary. Though she was (and is!) the perfect agent, we had a rough couple years of submissions. Several times we came THIS CLOSE to selling, but it never quite happened. Then in February 2010, Michelle called with the news that Sourcebooks wanted to buy not one, not two, but THREE books from me! I’m still reeling from the shock and joy (or maybe it’s the celebratory wine).

That’s the short story. Want the long one? That’s posted on my blog:

Was there ever a time you felt like giving up? Why didn't you?

Tawna: Though any sane person probably would have thought of quitting a million times, I never seriously considered it. I credit my stellar agent for always believing in me, and my parents for instilling me with such fabulous self-esteem that I never once thought, “I suck.” Every rejection fueled my fire and made me want to stick it to everyone who shot me down. I regarded the process as my “literary grudge f**k,” and credit that attitude with keeping me sane throughout my bumpy path to publication.

If you knew then what you know now, what would you have done differently?

Tawna: I would have purchased the Charmin instead of the Cottonelle.

Ha-ha! Okay, if you were interviewing yourself, what would you ask...and answer?

Tawna: Question: How do you keep your hair so shiny and manageable?

Answer: A painstaking process of being too lazy to wash it, followed by a rigorous failure to comb. Repeat as necessary.

And back to Linda again: Need I say more? Go. Check out Tawna's blog and website. I guarantee you will be as anxious as I am to read her books.

If you'd like to read the super-wonderful Tiffany Schmidt's interview with me, go here: Tiffany's blog.

Still in the mood for inspiration? You'll find it at the following links:

I didn't think it was possible to <3 you two more than I already did, but you are made of win. And I can't wait to have your names on my bookshelf.

Aw, thanks, Adri! Right back atcha. So keep writing, okay? I'm saving you a spot on my Friends Shelf. :)

Ahem, as I was saying, I'm a fan of the elite "Up and Up" (Tarjay) brand of tp, myself. Perhaps, someday I can aspire to Cottonelle--maybe when I get that book deal. Just so you know. Excellent post, Linda. The book sounds fab, Tawna--can't wait to read them all. If they are half as funny as your tweets and blog, you've got a fan. Also? You are the very definition of perseverance. It would have been so easy for you to give up, but you kept on keeping on--love it. Best wishes.

Linda G, thanks for interviewing one of my most favorite writers and CPs anywhere -- and the fact that you are "agency sistahs" just shows that Michelle W has the EXTREMELY good taste to choose BOTH of you! :-)

Adrien-Luc, awww...thanks! Can you make sure my book gets shelved next to Linda's? That way our books can be smart asses together.

Linda, thanks so much for letting me play in these reindeer games. Kinda fun to be interviewed!

Rockthemuffintop, I actually have to confess that I know nothing about TP brands. I just buy the cheapest 1-ply crap out there and stick it in the bathrooms. Thanks for reading the interview and for the well-wishes!

@muftopmommy, hi! And welcome. Tarjay is one of my fave places to shop, too.

Cynthia, thanks, and welcome to my humble little corner of the blogosphere. I will be forever grateful to Michelle for introducing me to your CP. Tawna rocks.

Very cool! I love reading all these stories :) And great author pic, btw!

Hi, Beth! It IS fun to read everyone's story, isn't it?

Hi, I'm here from Tawna's blog. Thought I'd stop by and say hello.

Wow, that is a great picture! I don't think if I stop washing my hair, it will look so great. And I am even more AWED by the three-book deal! That is fantastic! How exciting. I love romcoms, so I can't wait to read them all!

Tawna is one of my FAVORITE people on the whole wide internet! I love her story, and think she's fabulous!

Thanks for stopping by Elana's blog today and reading my interview!

Hi, Lola! Welcome. I'm happy to see anyone who came here via Tawna's blog--I figure they must have great taste. ;)

Hi, Kathy! Welcome to you, too. I tried not washing my hair for a week, just to see if it would work for me like it does for Tawna. Alas, major hair fail.

Hi, Jamie! What coincidence--Tawna is one of my favorite people on the whole internet, too.

And I've been having a blast bouncing from blog to blog & reading everyone's interviews--it's great to hear how other people have arrived at where they are.

Beth, thanks for the praise of the author pic! The brilliant and talented Claudine Birgy (a local photographer) gets credit for that one.

Lola, hey, great to see you over here! Stick around, Linda is a treat to read.

Kathy, thanks for both the hair praise and the book deal praise! Unfortunately, the books require a little more effort than the hair.

Jamie, I forget, was I paying you $25 or $50 for saying that? Loved your interview over on Elana's blog (especially the illustrations!)

Linda G, I didn't realize when you asked me to do this how fun it would be!

Tawna -- oops. Knew I forgot something. I just added a photo credit for Claudine.

And, yeah, it has been fun. I had no idea, either.