Yes! There ARE flying camels!

No, I don't mean the kind depicted here: 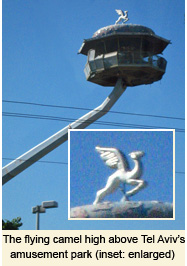 To the best of my knowledge, anyway. Perhaps the elusive Pegasus camel really does exist. Several, even. I mean, there'd have to be a breeding population, wouldn't there? Maybe they're just shy, like Bigfoot. (What's the plural of Bigfoot, anyway? Bigfeet?)

*Ahem* But I digress. I was thinking of this kind of flying camel:


The ice skating kind. Why was I thinking of that? Because.

Oh, come on. Does one really need a reason to think of ice skating? Isn't it enough that it's there? And, you know, has a vague connection to camels so it's fair game for one of my Hump Day posts?

Yes. Yes, that is enough.

I ice skated once. (Hey, I grew up in south central Texas. Not a lot of ice skating there.) It was at a rink in a mall in Houston. Trust me, gliding around on skinny little blades isn't as easy as it looks. Suffice it to say, my tush was at serious risk of frostbite before the afternoon was over, and I never felt compelled to repeat the experience. But I still like to watch other people do it.*

Do you ice skate? If so, have you ever done a flying camel?**


*Please don't ever quote that line out of context.
**Or that one.

I have tried ice skating, but the ice is too cold and when you fall (which for me is often), you discover how very hard it is too.

great post, just found your blog and will be back to read more!

i'm pretty sure only professionals should attempt a flying camel and despite my very good sense of balance and decent athleticism, i am NOT a professional skater. i'll stick to the sidelines on this one with you.

Hi MOV! Nice to meet your pixels. Thanks for stopping by. :)

Abby -- Amen on that! One flying camel attempt and I'd be in the hospital, I'm sure.

I used to roller skate all the time. And I've ice skated enough to do a little spin here and there, but nothing fancy. Certainly nothing with a camel in its name.

And you're so right about that ice being cold, hard, and unforgiving.

I'm the only one in my family whose skating skills are lacking. My guys all play hockey, so they can go backwards, and turn and stuff. Me? I can fall.

I've gotten quite good at that.

THIS IS A BROWSER TEST. Also, Linda, you're pretty. *pets hair*

Patty -- Must be all your practice at it... ;) Me, I'm GREAT at falling of sporting equipment. Skates, skis, you name it.

If I had ever done a flying camel, I certainly wouldn't admit it in public. ;-)

I have, however, performed an ice-skating move called "shoot the duck", while attired in a black tuxedo. True story...

I love ice skating, but I stick to basics. Going in a straight line, not having to hold onto the rail, and not falling down. If I can do those three things, I'm happy.

Yeah...ice skating is a little easier when the idea of falling isn't colored with visions of traction and bulk quantities of ibuprofen...
Didn't Snoopy fly a Sopwith Camel? Or was that the Red Baron? It was one of those two...

I'm way too much of a klutz, to even think about putting skates of any kind on my feet. I do think ice skating is an elegant art form. (Hugs) Indigo

Diane -- I've never done a camel, not me, no how, no way. I DO want hear all about you shooting the duck, though, when you get a chance, because THAT sounds interesting.

S.P. -- Those sound like the best things to master to me!

Teri Anne -- I think Snoopy's doghouse was a Sopwith Camel. Well, in his mind, anyway.

Indigo -- I love to watch it, too, but I have no illusions about my abilities. *grin*

Ice skate hell, I do good to walk!

I went ice skating once. It would really be fantastic to ice skate on an outdoor lake, and race across it with the wind turning your cheeks all rosy and your nose all runny. (Okay, maybe not the nose so much.) Or it would be even more fantastic to wear a hot outfit and reeeeally strut your stuff like the Olympians do. I did neither. It was an outdoor rink near the old Baltimore Colts stadium, and the rink was so jam-packed with people, I couldn't have fallen if I'd wanted to. Nobody did anything fancy. (Not that there was room!)We just went around and around in a boring circle.

I do not ice skate, although everyone else in my family knows how. I regret that sometimes, when we are all skiing and have to traverse a long flat section. My husband and daughter begin to *skate* on their skis to keep moving forward. I SEE their side-to-side movement, but I cannot duplicate it.

I shuffle along behind them, pulling myself with my poles. FAR behind them ... goes without saying.

I love ice skating, did it whenever possible as a kid. I practiced and practiced and was pretty sure I was doing an awesome flying camel. Then my mother took a movie and my foot was like six inches off the ice.

Moral of the story: never watch the video, your own sense of reality is much more satisfying.

I love skating. Been doing it since I was on double blades. :o) But I don't do it often enough to be that good at it LOL!

I ice skated as a kid. I could get around the rink/pond/whatever without falling down but that was about it. No camels, flying or otherwise.

Closest I ever came to flying camels was watching a pack of camels slide across the ice--not mine.

We skated now and then on the ice on our creek in the winter. Lots of bumps in parts of it altho the wide area covering our summer swimming hole was quite nice. I was, ahem, not a great success. All I can say is it was a good thing I already could do the splits w/out damage, lolol! But hey, we played *otters* and would slide down the snowy banks and out on to the ice. That was fun. :-)