Interview with the Penguin 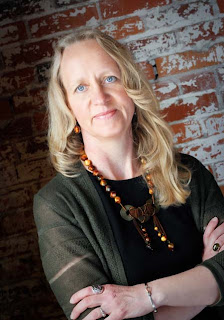 Okay, not really. It's an interview with the creator of one of my new favorite characters -- Poe, the penguin in Kerry Schafer's debut novel, BETWEEN. This bird, so seemingly incongruous (though he isn't, not really) in the story, just tickled me no end.

Kerry Schafer lives in Colville, Washington, with her family, which includes two cats, a rescue fish, and a preternaturally large black dog. A self-styled perpetual student, she earned an RN from Royal Alexandra Hospital in Edmonton, Alberta; a BA in English (Honours) from York University in Toronto, Ontario; and an M.Ed. in counseling psychology from Washington State University. 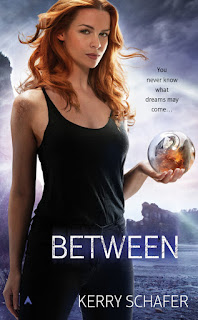 ”Vivian’s life is finally on track. She has a job she loves as an ER doctor and has just met – literally – the man of her dreams. But when her eccentric grandfather is murdered and designates her as his next of kin, she discovers that she is the last of a race of beings known as dreamshifters. It is her task to guard the doorways between waking and dreaming, which have already begun to unravel, spilling dangerous creatures from dream into the waking world. When she sets out to close the open doors and protect her town and the people she loves, Vivian confronts dragons, intrigue, and the dark secrets of her own family history. In the end, she comes face to face with a sorceress seeking eternal life and ultimate power. Vivian must find a way to stop her, or reality will be forever altered.”

1. BETWEEN, to me, reads like blend of realistic contemporary fiction and pure fantasy (yay, dragons!). It's a seductive combination, like salty/sugary snacks, which are somehow more addicting than either salty snacks or sugary snacks alone. Was it your goal to become the Maple-Bacon Potato Chips of the literary world?

Mmmmm. Now you have me thinking about salted caramels and chocolate dipped potato chips. This may be the first interview resulting in a five pound weight gain! In truth, my goal was just to make it onto the snack market. I'm flattered that the word bacon has now been used in proximity with BETWEEN.


2. Is it true that your unhealthy love--er, I mean fascination with--penguins led to the creation of the most unlikely sidekick ever? Or did Poe just show up on the page of his own accord and take root?

Unhealthy penguin love makes it sound like I have need to schedule an urgent appointment with a psychologist! What led to Poe turning up on the page was more of a philosophical thing than an actual Penguin obsession. Once upon a time there was a real life penguin whose name just happened to be Vivian. He was a male penguin, but he was named by some British scientists and maybe Vivian is an appropriate boy's name for them. Who knows the minds of scientists? Anyway - Vivian and his pals were rescued from an oil slick, cleaned up, equipped with transmitters, and turned loose to swim in the deep blue sea. The fun part of this was that the scientists created a website and posted a map on which they marked the penguins' regular progress on the way South to the breeding grounds. Vivian had other ideas. Instead of swimming South as expected, he swam in circles for awhile, and then struck out North. And so the whole idea of Swimming North came to mean something to me - defying expectation, going your own way, daring to go against the flow, so to speak. The penguin came into the initial draft of the book as a visible reminder of this. And then he refused to leave and sort of took over.


3. Now that BETWEEN has been out in the world for a little while, have you noticed a difference in your writing process? IOW, has the fact that one of your books is now being read by people who don't know you from Adam had an impact on how you approach the blank page? Are you more aware of anonymous eyes peeking over your shoulder, or are you able to put that out of your head as you create?

God. Those anonymous eyes. They scare the shit out of me. I sit down to write and I start to think about the 1-star reviewer who totally despised the first book and said "I have no idea what I've just read." I think about the people who were unhappy because there wasn't enough romance and the people who loved the ending because it wasn't a cliff hanger and the people who hated the ending because it wrapped up too many things and wasn't a cliff hanger. And then I think about that quote from Bill Cosby: "I don't know the key to success but the key to failure is trying to please everyone." I try to pay attention to the criticism that makes sense to me. And then I just shut it all off and go back to the story. What does Vivian want? Zee? Poe? What's in the way? I figure it's their story and I'd better listen to them.

4. Who was the toughest nut for you to crack, character-wise, in BETWEEN?

Zee. I made the mistake of initially basing him on a real life person. He had to be completely rewritten. And then there was a draft in which Warlord Zee was hot and steamy, but Real Life Zee was boring in comparison. Fixing that was a challenge. But I think he was worth the trouble.

Sure, with a disclaimer. At this point, I have no idea what will make the cut in Book Two. So here's a little passage that may or may not be in the final book:

"Vivian tried again to get her head clear, never an easy proposition when Zee was in her immediate vicinity. He was supposed to be tucked safely away in George's old cabin, safely out of sight, doing research into dreamshifter lore. She'd been planning on driving up to join him the minute she finished this shift – the last of her two weeks notice.

"I don't understand what you're doing in Krebston at all."

He avoided her eyes, suddenly deeply interested in a spot on the floor.

"The dragon," she breathed.

"All sorts of noise on the scanner about fire in the sky. Speculation about terrorists and UFOs online. Wouldn't be surprised if Homeland Security is in town."

"You were going to go take down a dragon. Without me. Walk right into the middle of a whole damn crowd of law men."

He shoved his hands into his jeans pockets and gave her the crooked smile that made a dimple in his unscarred cheek. A strand of hair fell across his forehead and into his eyes; she wanted to reach up and push it back, to feel the warmth of his skin beneath her fingers.

She also wanted to slap him."


Linda here again: Oooh, that sounds great! And if it does wind up on the cutting room floor, then at least we got to see it here.

Thanks for visiting my reality today, Kerry! And the rest of you, too. If any of you would like to visit an alternate reality (aka, a book), I heartily recommend BETWEEN. Just remember, though--Poe is MINE.

What an awesome teaser!
And who doesn't love a penguin who goes against the flow?

Great interview - thanks for introducing us to Kerry!

Kerry - I like the sound of this story, and I love the cover art! I'm off to read the first pages on Amazon now.

And that one-star review might sting a bit, but its content says more about the reviewer than the book. My "favourite" 2-star review for one of my books was "Huh? Didn't get it." That was the entire text of the review. It still makes me laugh.

What a super duper interview! Linda, when I'm rich and famous (or dead, whichever comes first) I want you to conduct my first interview.

This book sounds great. I mean, with a penguin as a character, how can it miss? I will buy it asap. Thanks!

Teri Anne -- I know, right? Just the concept is enough to intrigue me. The book living up to it was gravy.

Diane -- Ha! My favorite 1-star review of IN A FIX was on GoodReads. It was illustrated! Ha.

Susan -- I would love to interview you! Preferably before you die, though if we could figure out a way to swing it afterward, too, that might get some attention. *grin*

Great to meet you, Kerry. Sounds like a fun book. And who could resist a Poe the Penguin :)

Great interview. Dragons are one thing but penguins...now you've got me.

I'm putting this book on my TBR list! I love the cover too.

Your first question cracked me up!!! That's what I want to strive for: to be the Maple Bacon Potato Chips of the literary world. LOL

This books sounds intriguing..all the best with it!