So, one of my agency sistahs, Jennifer Iacopelli, has her first book coming out on May 1st. Which kind of sucks--

WAIT! Don't take that the wrong way. It only sucks because it's so far away! Other than that, it's totally cool!

And one thing that doesn't suck is, while we may have to wait until May to read it, we at least we can get a peek at the awesome cover right now! 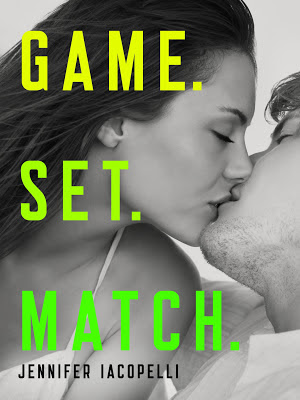 Full of the fabulosity, yes? I love it. But then, I have a thing for stubble. And kissing. And tennis.

Not that I play tennis anymore. My knees object to all that side-to-side hopping around. Also, once I realized I'd never be able to grunt like the Williams sisters, I kind of lost heart.

But I still like to watch. (Heh-heh.) Especially Roger Federer. That man can play! But I digress...

And now I'll be able to combine two of my favorite vicarious activities--tennis and reading! I can't wait.

Game. Set. Match. Synopsis:
Nestled along the coastline of North Carolina, the Outer Banks Tennis Academy is the best elite tennis training facility in the world. Head Coach, Dominic Kingston has assembled some of the finest talent in the sport. From the game's biggest stars to athletes scraping and clawing to achieve their dreams, OBX is full of ego, drama and romance. Only the strong survive in this pressure cooker of competition, on and off the court. Penny Harrison, the biggest rising star in tennis, is determined to win the French Open and beat her rival, the world’s number one player, Zina Lutrova. There’s just one problem, the only person who’s ever been able to shake her laser-like focus is her new training partner. Alex Russell, tennis’s resident bad boy, is at OBX recovering from a knee injury suffered after he crashed his motorcycle (with an Aussie supermodel on the back). He's hoping to regain his former place at the top of men’s tennis and Penny’s heart, while he’s at it. Tennis is all Jasmine Randazzo has ever known. Her parents have seven Grand Slam championships between them and she’s desperate to live up to their legacy. Her best friend is Teddy Harrison, Penny’s twin brother, and that’s all they’ve ever been, friends. Then one stupid, alcohol-laced kiss makes everything super awkward just as she as she starts prepping for the biggest junior tournament of the year, the Outer Banks Classic. The Classic is what draws Indiana Gaffney out of the hole she crawled into after her mom’s death. Even though she’s new to OBX, a win at the Classic is definitely possible. She has a big serve and killer forehand, but the rest of her game isn’t quite up to scratch and it doesn’t help that Jasmine Randazzo and her little minions are stuck-up bitches or that Jack Harrison, Penny’s agent and oldest brother, is too hot for words, not to mention way too old for her. Who will rise? Who will fall?  Told from rotating points of view, GAME. SET. MATCH., is a 'new adult' novel about three girls with one goal: to be the best tennis player in the world.

If you want to learn more about it, you can check it out on Goodreads here: http://www.goodreads.com/book/show/16082871-game-set-match

AND here's a Rafflecopter Link for those who want to win some cool prizes:

Do you watch tennis? (Tennis players have nice, um, hipular regions. Just sayin'.) Do you have a favorite player?

Alternate question for those who are not (yet) into tennis: What is your favorite vicarious activity?
Posted by Linda G. at 6:46 AM

I'm going to have to say that I'm more of a marathon groupie. I know I'll never run one. But I love that there are people out there willing to torture themselves like that.
I may be a little sick.

my mom adores tennis. Me, I'm a runner, a short distance runner mind you! And a fair weather runner to boot :)

Well, it's been a long time since I qualified as a "new" adult, but this sounds like a good book... and it's definitely a yummy cover.

Last time I played tennis was in the early '60s. A bunch of us used to get together to play just for fun. My hubby ('course, he wasn't my hubby YET) didn't give a diddle about tennis, but he did give a diddle about me. (awwww) So he tried to get my attention by showing off and making cool plays, which I, of course, barely noticed. (bitch!) The coup de grace came when he tried to jump over the net, and missed. Let's just say he had to "rest" on the ground for a while, gritting his teeth and NOT grabbing his poor dangly bits. And me? I didn't even notice that. (double bitch!) He told me about it years later.

That sounds good. Even though I don't generally like sports, I like books written around sports, weird, huh?
I'll definitely put this on my tbr.
What does 'new adult' mean in this context?

My cousin was a great tennis player and I had to help her practice. It put me off a bit.