Monday Musing: Vice or Virtue -- Which way do you lean? 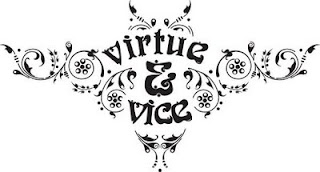 See, I think there's a spectrum:

On the Virtue-Vice spectrum, most people gravitate toward the middle. And thank goodness (or badness!) for that.

The Ones are too saintly...

We may admire them, but it's uncomfortable to be around them for any length of time. Hard not to compare yourself to them, and you're likely to wind up feeling bad about yourself if you do. And, come on, who likes that?

The Nines are just plain scary...

Vice that strong has gone beyond the pale. If you don't fear for yourself, you fear for them and what they are doing to themselves. Again, who wants to be around that?

Twos and Eights are pushing the edge of the envelope...

Tolerable. Twos can be inspirational, and Eights can be exciting to be around. But you probably wouldn't want to live with either of them.

Well, depending on where you are on the scale, they could provide a nice balance. A Three could keep a Seven on the (relatively) straight and narrow, and a Seven could keep a Three from sinking into the depths of dullness.

The regular, not-too-nice, not-too-nasty types. Your average Joes. Most people are Fours, Fives, and Sixes, I think.

My favorite vice? Gee, it's kind of tough to narrow it down. Let's see ... I do like to ogle cute guys -- unobtrusively, and from a respectful distance -- but that's more art appreciation than a real vice. (What? I happen to think our Creator is great artist. It would be rude to ignore His *cough* body of work.)

I guess I could just go with the classics in overindulgence: chocolate and intoxicating beverages. But honestly, I'm probably barely a Four or a Five in those, as much fun as it is for me to spin it over to the wilder side.

Might have to go with Smart-Assery. I'm at least an Eight and a half there, and I do tend to appreciate it in others.

My favorite virtue is Kindness. Not the smarmy, oh-aren't-I-a-saint type. The real, Golden-Rule type. Because I've been the recipient of it, so I know how important it can be in someone's life.

Do you have a favorite vice? Or virtue?

If not, you might try shopping at this store in Panama City Beach, FL: 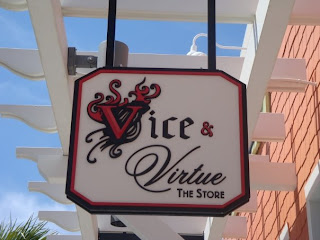 I've never been there myself, but you can bet I'll be paying them a visit if I'm ever in the area.

I LOVE this....To help put it in perspective, an Eight is who you wanted to date in high school. And a Three is who you want your kid to date. (Maybe a Two.)

I definitely think a person's vices are what make them interesting, but if they're not balanced out by virtues then -- you're right -- they're too scary to be around.

I'm sure I fall in the middle somewhere. With school coming up around the corner -- and the inevitable staff meetings -- I'm going to have to make a conscious effort to tamp down on one of my biggest faults -- smartass comments.

I need to remember, while sitting in those meetings, that silence is a virtue! :)

i definitely fall somewhere in the middle, leaning towards the virtuous side.

and yes, it is a constant struggle not to be the dullest knife in the drawer. :)

I have very few vices, but I cling dearly to the ones I have and exercise them frequently. :)

Dianne -- LOL! Silence is the toughest virtue for a natural-born smartass to master.

Abby -- YOU have the supreme virtue of making virtue entertaining. Not easy, that. :)

I'm probably in the middle somewhere, but I'm not awake enough yet to figure out where. Loved the eight and two line :)

Well, all of twitter knows my chocolate obsession is probably off the scale !

I have no other vices.

Only my husband knows my vices and I like it that way. I'm somewhere in the middle, definitely leaning closer to the not so virtuous side :), but I haven't hit the scary zone...yet.

Depends on the situation. As a rule, I'm a disgusting goody-two-shoes, but I have my moments on the wild side. Unfortunately, I've outlived my more enjoyable vices. (There's absolutely nothing appealing about a broad my age strutting her stuff when parts of my body keeps jiggling a full five minutes after I stop!)

Now you really have me thinking. My favorite virtue is kindness as well. It's what first attracted my to my husband. My favorite vice I think is outspokenness. People who just blurt out what they are thinking appeal to me while those who couch their words in niceties while seeming phony make me want to barf.

I'm a 7 in dodgy nail varnish (not an 8 or 9 as I only use one colour at a time and usually remove it before it's totally skanky) but I happen to think that vice should count less than some others. Is thinking your own vice is less bad than other people's vices actually a vice in itself?

Love this! I'm a bit of a goody-goody (I know, gag). I'm probably a three on your scale. Maybe four. I do have my vices. Kindness is probably my favorite virtue too. I'm nice to pretty much everybody because it makes such a difference to my mood when someone's genuinely nice.

Oh I'm an ogler too!! LOL.
We should start a club or something :)
And I loved the line about high school too!! :P
xx

Carol -- That line seems to have struck a chord. *grin*

Patty -- Chocolate is the BEST vice to have. :)

Susan -- Ha! Nothing wrong with a little jiggle in your wiggle. :) Make those wild moments count!

Karen G -- And outspokenness has the side effect of being so entertaining, too. *grin*

Keriann -- As long as you enjoy the vices you have what do numbers really matter? ;)

I'll be honest, in my youth I was probably hovering around the seven mark. Now? I'm too old and too tired to be more than a three :)

I'm really not sure what my number is. It depends on the day, seriously. Some days I have angel wings, but that can build up on me and bring out the devil horns on a "why not" kind of day. I do like to have me a good time. I'm going to be Switzerland and say if you mash it up I average out to a solid 5. That's my story, anyway. You believe me, right?

I'm probaly a 2 when it comes to compassion for others.
I reckon to even that up I'm an 8 on my vice. And no I'm not going to tell you what it is!
Although if craving chocolate is a vice I can admit to a 9 on that

Sarah -- LOL! It does get tougher to keep the numbers up as we get older.

Michele -- "Why not?" -- the words that have led to many a rise toward the vice end of the spectrum.

I LOVE what you said about loving people for their virtues but liking them for their vices! I absolutely agree. Plus virtue is boring :) It's the vices that make people interesting. Kinda like that Tolstoy quote about all happy families being alike -- people are virtuous in the same ways, but excitingly different in their vices :)

I'm pretty boring on the vice-virtue scale -- not many vices at all :) I think that's why I've always had a thing for bad boys, to compensate :))