For me, one of the joys of being a writer is getting to meet other writers in the great big online writing community. Cyberspace is loaded with us, and provides a great avenue to connect with like minds. Or in this case, like potty-mouths. I stumbled across Diane's blog a while back, and have been laughing myself silly at her posts ever since. 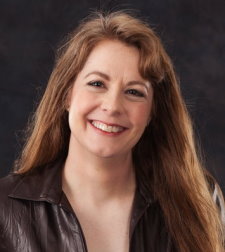 Diane in her own words:

By profession, I'm a technical writer, computer geek, and ex-interior designer. I'm good at two out of three of these things. I had the sense to quit the one I sucked at.

To deal with my mid-life crisis, I also write adventure novels featuring a middle-aged female protagonist, Aydan Kelly. And I kickbox.

This seemed more productive than indulging in more typical mid-life crisis activities like getting a divorce, buying a Harley Crossbones, and cruising across the country picking up men in sleazy bars. Especially since it's winter most of the months of the year here.

It's much more comfortable to sit at my computer. And heck, Harleys are expensive. Come to think of it, so are beer and gasoline.

Oh, and I still love my husband. There's that. I'll stick with the writing.

P.S. If you want to know the truth about why Aydan Kelly looks like me, visit my website at http://www.dianehenders.com, and click on the FAQ link.

And here's a little about the first book in her series; i.e., the one that got me hooked:

Never Say Spy
Despite her penchant for weapons and ripe language, Aydan Kelly’s resumé reads ‘bookkeeper’, not ‘badass’. She’s leaving the city to fulfill her dream of rural tranquillity when she gets carjacked by a man who shouldn’t exist. When RCMP officer John Kane kills her would-be abductor, Aydan thinks her troubles are over. But Kane’s investigation implicates her in an international espionage plot, and criminal charges become the least of her worries when she’s targeted by the very spies Kane suspects her of aiding. Pity her enemies. Because nobody’s tougher than a middle-aged woman who wants her dream back. – Spicy suspense served hard-boiled –

Okay, you can see why I read that first one. I mean, come on...a badass middle-aged woman? Those are rare to find in fiction! I had to investigate. I've since devoured all five books in the series. Honestly, they're like potato chips--I couldn't stop.

Which is why I wanted to share her with you guys. Here's the interview:

Thank you so much for letting me come and play today.  I’m a big fan of In A Fix and I love your blog, so I’m pumped to be here!

1.      I couldn't help but notice—and admire!—Aydan's impressive potty mouth. Where on Earth did you learn those words?

I wish I’d had Aydan’s Uncle Roger to teach me the good stuff, but sadly, I had to learn it all on my own.

Let’s just say I had various unsavory sources.  And I’m a quick study - my mind seems to naturally retain filth.  I can recite three obscene limericks about testicles without a moment’s hesitation, but classic literary poetry?  Yeah, not so much.

I’d say I’m embarrassed to admit that, but you’d know I was lying.

2.      There are five books so far in the Never Say Spy series. Will there be more? (Your answer better be a resounding "Yes!") Do you have a particular number of books in mind, or are you just going to see how long Aydan will keep talking to you?

Yikes, threats!  Lucky I’m working on Book 6 right now.  It should be released in spring of 2013, and I’m pretty sure there’s at least one more coming after that.  I never intended to write a series, but every time I think I’m writing the last book, the next one starts banging at my mental doors.

I really have no idea how many books there are going to be.  I’m having a blast writing them, so I guess I’ll just keep going as long as the voices keep talking.

Everybody has voices in their heads, right?

3.      Aydan, in her late(ish) forties, is a bit older than many kick-ass heroines. Was it a conscious decision to go with that, or is that just how she came to you?

Definitely a conscious decision.  I was having a major mid-life crisis.  Everywhere I looked, the media message was that if you’re female and pushing 50, you’d better get out the Depends and hope you have children to give meaning to your pathetic existence.

Anyway, I went looking for some fiction featuring kick-ass, sexy 40+ women, and I found… nothing.  Which is preposterous.  Middle age is when we actually have the attitude and confidence to go out and find what we want and kick ass if necessary to get it.  So I wrote what I wanted to read.

4.      Are Hellhound and Kane based on people in your real life? If so, can you introduce them to me? *waggles eyebrows*

Oh, don’t I wish?  I won’t say I’ve never encountered guys like them, but Hellhound and Kane aren’t based on anyone currently in my real life.  It’s probably a good thing - it might complicate matters with Hubby…

5.      Aydan has some *cough* interesting clients in her bookkeeping business. (I'm thinking of a certain "adult toy" shop.) How much research went into your descriptions of the merchandise?

Bawdy Pillows and chocolate-scented leather are mere fig-newtons of my imagination.  But if I ever find a four-foot-tall penis-shaped body pillow with an air bladder in it, I’m gonna buy it just for laughs!

6.      I notice your publisher is listed as "PEBKAC Publishing." I assume that means "Problem Exists Between Keyboard And Chair." Brilliant! Can you tell us a little about your decision to go this, um, "problematic" route on your publishing journey? 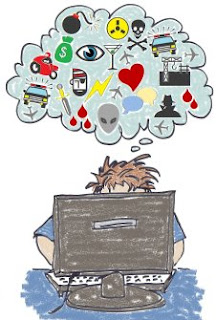 Oh, you’re good!  PEBKAC is an old joke among help-desk geeks.  Since my novels are generated by the disturbed mind located between my keyboard and chair, it seemed a natural choice.

I decided to self-publish for a few reasons:
1)      I never intended to write fiction at all.  In fact I swore I never would (that story’s on the FAQ page of my blog), so I wasn’t hugely invested in ‘getting published’.
2)      I’m too impatient to wait around for a legacy publisher to get my books out there.
3)      I’m a notorious do-it-yourself-er.

I sent out exactly one query letter and got rejected faster than humanly possible.  Literally.  I got an automated email saying the agent was out of town and would return on the 5th of the month.  On the 4th , I got my form-letter rejection.

That’s when I decided, “Screw it, I don’t need this” and PEBKAC Publishing was born.  My original plan was to gather a few smartass indie authors under the PEBKAC label, but I’ve been too busy writing to do that… yet.  I had fun sketching the mascot, though:

7.      You just released a new book with a title I wish I'd thought of first: Probably Inappropriate. You don't have to sell me on it, because I'll pounce on anything you write, but how can we convince others to give it a go? Do you find bribery or threats more effective in these situations?

Aw, thanks!  Actually, I kinda discourage people from buying it.  It’s a selection of posts from my blog, and they’re all up there for free except the first essay in the book.  And if you’re really serious about getting that for free, you’ll find it in the “Look Inside The Book” feature on Amazon.

I know, I know.  I’m such a good salesperson.  It’s just that I’d feel awful if somebody bought the book expecting brand-new content.  But for bookaholics like me who’d rather read a book (or e-book) than scroll text online, I give you… *drumroll please*  ……“Probably Inappropriate”.

And I would never threaten anybody (in any way that would leave evidence).  Bribery, on the other hand… well, hell yeah!

Folks, leave a comment here on Linda’s blog, and we’ll randomly choose someone to win a signed copy of either “Probably Inappropriate” or “Never Say Spy” (the first novel in my series) – winner’s choice.  Thanks for reading!

[Aside from Linda: Since you can always go read Diane's blog for free I'd advise going with Never Say Spy. Because, yannoh, John Kane. And Hellhound. Just sayin'. ;)
Posted by Linda G. at 7:19 AM

Oh my gosh, she is a riot! And I would LOVE to read about a middle-aged badass. (Especially since I consider myself one) LOL

Jennifer -- Diane is hilarious, and she writes the best middle-aged badass ever. She's no slouch with her secondary characters, either.

PEBKAC nearly had me choking on my morning OJ! HIlarious. I'm also a technical writer by day, so I completely understand.

Patty -- I know, right? When I first saw PEBKAC Publishing I about fell off my chair. *grin*

This sounds amazing! (especially from a nearly-50-year-old who wishes she were a bit more badass). If I don't win, I'm searching out these titles as fast as possible!

I have read all of the books, they are great. I myself am a very large fan of John Kane....not so much of Hellhound. But you need to read the books to find out why....

Sounds awesome. Another to add to my Amazon list :)

Added to my tbr. Glad it's payday cause I need some fun and Grimes book 2 isn't out yet.

Hurrah for a heroine over 26! I've nothing against women that age, I even write about them sometimes, but it's nice to have older characters too.

Potty mouths unite! Nice to meet ya! Sounds like a great book:)

PEBKAC Publishing. And you self-published after your 2nd rejection letter. I've had 4! I need to get on the ball.
Thanks, Linda. She's awesome!

@Patty - Tech writers unite! I bet we could swap some stories...

@Jill F - Sigh. Poor Hellhound... but he is definitely an acquired taste.

@Carol - The list just keeps getting longer, doesn't it? Thanks for adding me.

@J,J,J - Thanks for adding me to your list. Yeah, what's with that Grimes chick? She's just torturing us by making us wait. :-)

@Patsy - Those 26-year-olds are amateurs. Real middle-aged women know how to kick ass.

@Michele - Nice to meet you, too! We potty mouths need to stick together.

Two of my favorite bloggers in the same place. Awesome!