It's not whether you win or...oh, who am I kidding? Just let me WIN already!

I'm not talking about spelling bees, or geography bees, or math bees (are there math bees?), though those are all cool in their own way. But when you win those, the prizes are more like rewards. You've earned them.

Sadly, I hardly ever win anything. Proof:

3. A chance to buy the Beanie Baby "Princess Bear" at regular price when it was the hottest thing on the market.***


So you can see why I'm rather excited about Elizabeth Ryann's RomCom Books Edition BIG OL' CONTEST.

Just look at some of the loot up for grabs: 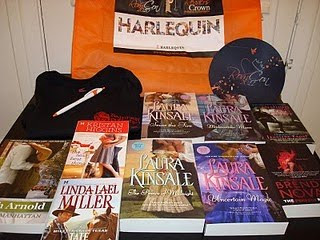 Alas, now I am conflicted. If I were a nice person, instead of a Major Badass, I would tell you all to go enter. But that would mean more competition for me, and since I basically suck at winning stuff already...well, you can see my dilemma.

Tell you what. I'll leave it to your conscience. Go ahead and enter...if you can stand to look at yourself in the mirror when I don't win something yet again in life. Go on. I dare you. And just try to live with yourself afterward.


*I was two years old, so this one is family lore. I really don't remember it all, and thank goodness for that, since apparently the farmer's wife who lived down the road from us (we were in England) offered to kill & pluck both chickens in exchange for keeping one. Seemed like a good deal to my mom, who had no interest in keeping chickens as pets.

**This was when TG & I were first married. The deal was, you "bet" on a horse and then watched a cheesy TV horse-racing show to see if your horse won. Technically, TG's horse won, but we're married, so what's his is mine, right?

***I'm not sure this one even counts, since Hallmark made me pay the $5.99 retail price. This was at the height of the Beanie Baby craze, and Princess Bear was going for upwards of $700 on Ebay. Did I sell it then? Nope. It's still in my drawer, in pristine condition, and now worth...oh, about a buck ninety-five, last I checked. But I have high hopes that it's just a temporary downturn. (Okay, no I don't. I was stupid not to sell it then. Stupid, stupid, stupid...)
Posted by Linda G. at 11:01 AM

Thank you!! And I have some doubles, so it's not like this is your only shot, I promise. And I have very few followers, so the odds are really really good that you'll win. Just saying.

Like you, I too never win anything. No, that isn't true. I won a first chapter crit from Angela Ackerman. Yep, that's it. Oh and socks. At my prom night raffle I won a pair of purple socks.

Since we are united in our...lack of luck, why not join forces? I won't enter in this contest (out of the goodness of my heart). AND if for some unknowable reason in the universe, you DON'T win, why don't we dress ourselves in all black and "win" the prizes back from its previous owner?

You can return the favor to me the next time I "win" a contest in second place. :-)

Haha, I did Math Olympiads in fifth grade, and I won that too. It might be my most impressive trophy. I was actually really surprised I won, since I entered at the last minute, and everyone assumed Billy, who loved math, would win. When I did, I could never quite look at Billy the same. I mean, seriously, you love math and I beat you so easily? Hmm.

ha! I entered her contest and I feel pretty lucky...er...get your mind out of the gutter *snicker* but I'd be lying if I said I wasn't thinking the same thing. lol

Hahahaha. I always win random crap and never like the lottery or anything. Good luck!!!

Look, I don't want to get all braggy on you, but I once won an hour Rolls Royce ride by guessing the weight of a huge ass pumpkin at a fundraiser fair in my town. Yeah, I did. Skillz, who says I have no skillz!?

Boy, my mother and I enjoyed sipping sparkling ginger ale riding around town. I'm sure the Rolls Royce people were thrilled at their potential client!!

Beanie Babies oh man, there comes back the childhood memories. My luck with contests is about the same as me bowling: always gutters or strikes. Sadly I have no consistency.

Also, Math Olympiads? Poor Billy. How can any guy live up to that? ;)

Karla -- Really! You should fear my bad ass in a cage match! I am RUTHLESS! (Who is this "Ruth," anyway, and why is being without her so badass?)

Candyland -- Thanks! I could use some random. :)

Muffintopmommy -- Seriously? A ride in a Rolls? That sounds so COOL! I may have to kick you now. Even if you do have mad pumpkin-weight-guessing skillz.

SM -- Consistency in winning (or in my case, losing) is highly over-rated. Much better to let that pendulum swing & have a chance to win big! :)

In my books, you'll always be a winner Linda, which is why I'm entering the contest. *eg*

I never win anything. (Okay, I won a book once at a librarians' conference, but it was a copy of Captain Underpants, so...)
Truth be told, I'm not even allowed to touch the occasional lottery ticket that comes into the house because it will then absorb my unlucky gene and the dollar and the dream will go down the tubes.

Good luck in the contest. I hope you win!

I don't often win either. Had I known this I'd have rigged the one and only contest I've ever held so that YOU could have won. Then you could have added a $25 amazon certificate to your list of winning. Sigh. Woulda, coulda, shoulda...

GOOD LUCK! I hope you win.

You are such a suck up. Instead I mean...er...Good luck. Yeah, that is really what I meant.

Jeannie -- Wow. Your track record is even worse than mine. So, your family thinks you're a jinx, huh? Does that mean, now that you've commented on this post, I don't have a snowball's chance in the Romance section of my local bookstore (the hottest place I know) of winning? (Not to worry. I already jinx myself, so I won't blame you when it happens.)

Posey -- You would've rigged your contest for moi? Awww. That is so sweet! Thank you. It's the thought that counts. :)

Kelly -- You're just jealous that I commented first on Elizabeth's contest post. I'm sure she'll give me extra credit for that. ;)

I totally will! Is it okay that the extra credit will be in the form of crossing my fingers?

Elizabeth -- Only if your fingers have really powerful mojo.

They do indeed. AND they have an excellent resume: I have lovely handwriting, can write with either hand (though the left is slower since I don't use it as often), can draw, can play the violin, and I have very strong nails. My fingers are awesome, and I love all ten. Plus there's a magical freckle that I was born with on my right middle finger, that my mom had on the same finger, but only while she was pregnant with me. Isn't that the kind of mojo you want on your side?